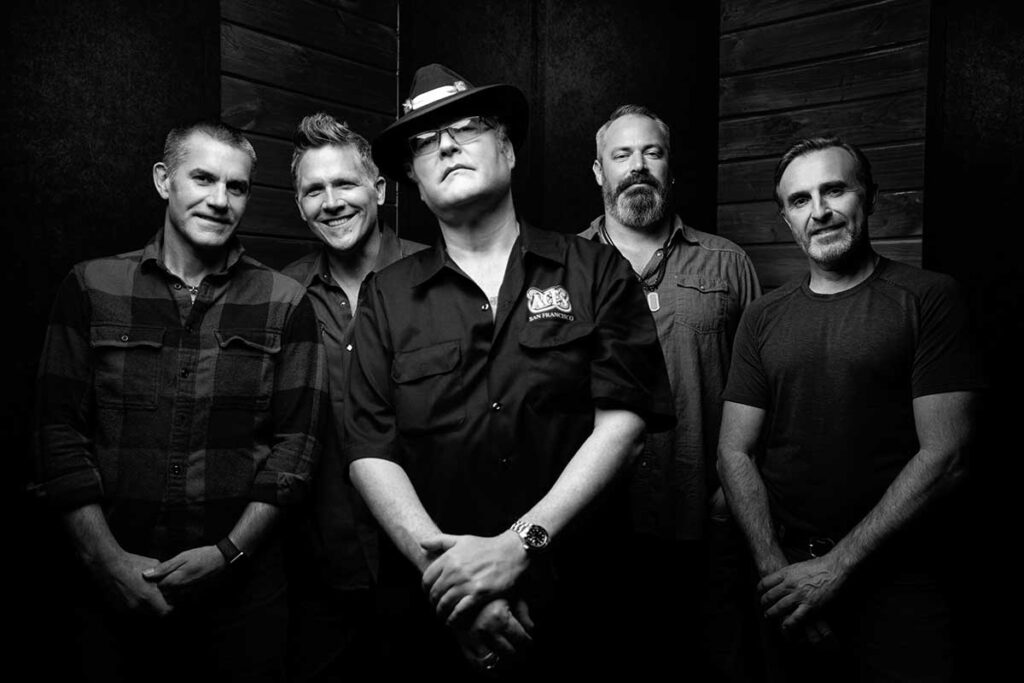 Blues Traveler has played a 4th of July show at Red Rocks every year except for two: 1999 (Harpist/Frontman John Popper had an angioplasty procedure that preempted that year) and the pandemic-cratered year of 2020. Guitarist Chan Kinchla has been there for every single one. This year, the prolific jam band slides into Morrison atop a wildly popular album — Traveler’s Blues (2021, Round Hill Records) — a gorgeous blues outing that features a host of guest stars, including Christone “Kingfish” Ingram, John Scofield, Warren Haynes, Keb’ Mo and Rita Wilson. Here, Kinchla talks about his favorite Red Rocks memories, his new secret side project and why — especially where the blues is concerned — less is always more.

Chan Kinchla: Well, so far, just dandy. We were out in May. We got a great week under our belts, and then we got punched in the dick by COVID. I hope I can say that?

FD: You can say punched in the dick. No problem.

CK: Great. Because I love saying “punched in the dick.” We got kicked in the vagina by the COVID bug, which was fine. Honestly, it’s par for the course now with all my friends and bands and everything, everyone’s going to lose a few shows to COVID unfortunately. Anyway, we start up tomorrow here in Mansfield with Train and Jewel, which should be a fun power-packed summer of hits. We did carve out a little break to come to do our traditional Red Rock celebration of summer.

Chan Kinchla: Well, it is our favorite venue and I’m fairly sure that any musician you ask, it’s if not their favorite, in their top couple, top three. There’s nothing like Red Rocks. To us, the venue itself is amazing, but we also have a special relationship with Colorado. I think early on — we were based out of New York City in the Northeast — and we showed up in Boulder and played the Boulder Theater. And it was the first place away from our little area in the Northeast where we had packed at a show and we had no idea how everyone had heard of us. This was back in the dark ages, people had to go with word of mouth and trade tapes, I guess. But so we were always coming back to Colorado. We’d play all the ski resorts in the middle of winter, sliding around on the mountains… Colorado is really a second home to us in a lot of ways as far as the band goes.

FD: Yeah, the jam band scene here has always been enormous. “Jam band” almost seems like a misnomer. It always has to me. Is that something that’s ever struck you that you felt like it was the right bucket for you?

CK: Blues Traveler’s MO is we fit in none of the buckets or all of the buckets. We started out on the East Coast playing with Phish and Widespread — The Dead were heroes to all of us in varying degrees. That was the inspiration — to be a cool touring band like The Dead was what we were all looking at, and the term “jam band” didn’t really exist back then. All of us were really intent on playing great live shows. And there wasn’t any rules to how we could do it. I think we’ve always been a little more focused on being a little more creative with songwriting, and trying different influences was something that was always important to our style. So we’ve definitely kept that going, but improvising, and having the shows breathe and be their own thing is also really important. So, the great thing about the term “jam band,” it does have this noodle-y thing, but also, it’s just such a large bucket. I think we fit in there just fine, but we have our own flavor of it, for sure. 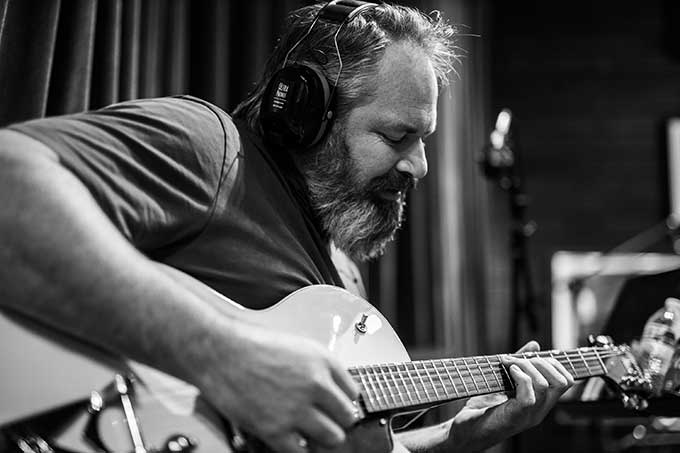 FD:  Travelers Blues struck me as very much a “return to your roots” approach. And you see a lot of bands that have some longevity do this thing where, eventually, the good ones come full circle and then discover something pure and elegant in the simplicity of their roots. And that really struck me listening to this album is that this is simply a really good blues album.

Chan Kinchla: Well, we actually started out in high school — the name of the band was Blues Band and we definitely played much more blues music. And I think what we loved about the blues is in the form is it had so much room to take in the moment and depending on how you play a song, the speed, the attack, the solos are always a little different — it’s a very improvisational form of music and we love that about it. And so as we got going, we just started throwing everything in the pot, which was great. But we wanted to make a blues record for a long time. And all the pieces fell together during the pandemic in 2020. And we were surprised how easy it was to come back full circle. However, when we were in high school in Princeton, New Jersey, we definitely could not play the blues as well as we can now. So maybe we needed to wait 30 years to be able to make a proper blues record. And it came together really organically and they’re all pretty much live takes, give or take but I got to give Matt Rollings (Willie Nelson, Lyle Lovett, Mary Chapin Carpenter, Keith Urban, Mark Knopfler, et. al), our producer, a lot of credit for constantly telling us to play less because our instinct is always to play more as a true jam band would.

FD: The Gnarls Barkley’s “Crazy” cover with John Scofield: You’re a monster player. What was it like playing with probably one of the top five other guitarists in the country, in the world?

Chan Kinchla: There’s so many great guitar players on there — I was playing all the rhythm parts for the most part and I had plenty of solos on there too, but with all these great players, I was just happy that I fit in  — but yeah, getting him and Warren Haynes on there and Keb’ Mo on there and Kingfish — he’s just a phenomenal player. So for us, it was interesting because when we did the album, it was in the middle of the pandemic. So we just hunkered down ourselves in the studio and did all the basic tracks. And then our producer Matt was in charge of the logistics of getting everyone involved to come in and put the pieces over it. It was like Christmas hearing what these people would do to these tracks that we had made. We were as excited to hear them as anyone and I’m just happy to have been able to fit right in with those amazing players. So I’m just, I’m proud of that.

FD: I’ve been a Blues Traveler fan since the day I discovered you guys when I was in high school. It’s always fun for me, every new album to see the progression, to see the new ideas come in, and especially comparing the albums to the live performances because it’s such a different experience.

CK: For us, it’s a very different experience between songwriting and being in the studio than it is being live. Live is really its own organic mode of expression. So we don’t really try to make albums that sound like our live show because you’re not there. There’s no lights, the environment of a live show when you listen to it back on a little record without any fans or anything, it doesn’t even sound as good, even if it’s the exact same notes. So we always try and separate them. And I do think part of the reason we’ve been able to continually go 35 years now and doing stuff every year, always touring and making records, is we always do try different things, especially in the studio. It’s what has kept us fresh creatively.

FD: What’s your favorite tune on this new album?

CK: Oh, well the one that goes over best live is Funky Bitch. That one goes over really well. Gosh, here, there’s one that’s the weirdest one. Let me, I’m so bad with my names. Hold on. Oh, one I really like is “Need Your Love So Bad” is so cool with the War and Treaty. I think that one came out really good. We don’t really play that one live, but as a recording, I think it’s just so different than what we normally do.

FD: Do you have a favorite anecdote from a Red Rocks performance, something that sticks out?

FD: That’s beautiful. What’s on your future plans, what’s in store, do you guys have something else in the hopper that you’re planning for the next album?

Chan Kinchla: Thankfully after the boring apocalypse of the last two years — We did get a run in last summer. As a matter of fact, another favorite Red Rock memory is our first real show back after the pandemic was Red Rocks last year. And we hadn’t really played in 14, 15 months. That’s the longest we’ve gone without real proper shows. I think we’d done a few private, little events, and we just boom, hit Red Rock and it was like we never left. It was just a great place to start music again. So that was a fond memory, but we have so much. We’re going be touring all the way through the rest of the year. So I think right now it’s just focus on making our live shows good, getting that ball rolling. And we’ve got a few things. We’ll probably do another record. I think our next one, we might do more of a soul R&B thing, because we had such a kick out of doing the blues covers. So the soul R&B thing is another influence on us. So that’s mulling around or maybe we’ll do another original album. Who knows?

FD: Okay. Last question. Is there a secret Chan Kinchla project that you have always wanted to take on that you still have yet to attack?

CK: Well, it’s funny you should say that. I actually have started a Chan Kinchla project over the last year, back in Los Angeles. I live in Los Angeles. It’s a band called W4RHORS3, which is a power trio. Me, Wally Ingram on drums, Paul Ill on bass. And we do have a roving cast of other people that play with us. So I’m in the midst of that project when I have off time from the band. And we’re going to keep it in the great Southland of Southern California for now. So that’s a great fun project and something I’ve always wanted. Now that my kids are grown up, I got a lot of free time. I need a side hustle.

Blues Traveler plays Red Rocks on July 4 at 6 p.m. Tickets are $35+ at RedRocksOnline.com.