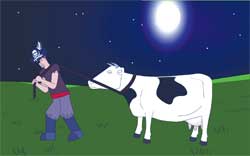 Taran Van Hemert is a poster child for local art students. The budding animator (and recent graduate of the Denver School of the Arts) was one of last year’s finalists for the youngARTS program, a capstone initiative of the National Foundation for Advancement in the Arts. Out of approximately 8,000 applicants each year, around 150 finalists get selected for a week-long arts submersion program in Miami. Spend a few minutes enjoying the humorously simple animations available on his website and you can see why the 19-year-old was selected.

FD: How did you get started in animation?
TVH: During our childhood, my brother and I would draw comics together called “Bob Comics”—named after the main character. We made more than 600 pages of them. It was all stick figures, but the comics were pretty funny. I liked to draw action scenes, and one day my brother showed me how I could use Microsoft Powerpoint to animate these scenes. The animations I made were crude and choppy, but everyone liked them.

FD: Who are your biggest artistic influences?
TVH: Adam Phillips, an ex-Disney animator who decided to pursue his own artistic endeavors rather than draw another background for a Disney. His animations are among the most beautiful and inspirational. James Farr, animator of the popular online series “Xombie.” …His ideas are original and imaginative.

FD: What are the biggest obstacles you’ve faced so far as an animator?
TVH: I’ve been diagnosed with attention deficit disorder. It’s always been difficult for me to pay attention and stay focused on things. So there have been times where I just can’t stay focused on my animation and I wander off to do something less intensive. However, A.D.D. has an upside… A.D.D. also confers the ability to “hyperfocus.” When the deadline for one of my projects was approaching fast, I was able to spend about 10 hours a day just animating. So A.D.D. can be kind of a mixed blessing.

FD: Who are your favorite animated characters in history and why?
TVH: Firstly, Bugs Bunny. Who doesn’t like Bugs Bunny? I liked him as a child and I still do. There’s some things I simply refuse to outgrow. The kind of humor in Bugs Bunny cartoons is the kind of humor I like best—silly and lighthearted. The comics me and my brother made were full of this kind of humor. Secondly, Bitey of Brackenwood. He’s one of Adam Phillips’ creations. I like Bitey for a lot of reasons, especially because he’s quite unlike most characters I’ve seen. Bitey is usually being a pest most of the time just for the fun of it. He’ll then suffer the consequences, but never learns any sort of lesson from it. Bitey is uncaring and proud of it, thinks he’s much tougher than he is, and is simultaneously daring and wimpy. (His mention of Snoopy, Wile E. Coyote and Calvin and Hobbes were cut for space —ed.)

FD: CGI vs. good ol’ fashioned pen and paper… kind of like the old analog vs. digital argument. Where do you fall
and why?
TVH: Digital, without a doubt. To animate something digitally is far easier, neater, cheaper and more efficient. If I made analog animations, I would have thousands of sheets of acetate cluttering up my already cluttered work area.

FD: What’s your creative process like? Strange McFarlane
toys littering the desk and Tool playing in the background? Two hours of Looney Tunes on DVD and then a bowl of Frosted Flakes?
TVH: Actually, I’m not inspired by visuals. When I made music videos, the inspiration was the music, but right now I’m mainly inspired by scientific concepts—things like entropy or synesthesia.

FD: What’s your dream job?
TVH: That’s a tough question. I’m not sure that I want to be an animator, because for me, it’s not really about the drawings and animation. It’s about sharing my stories and ideas. So if we’re talking about a dream job, I might as well dream big: I think it would be great to be a director of animation for a company like Pixar.

To register your budding artist (high school seniors in the 2008-09 school year or graduates who will be 17 or 18 years old on Dec. 1) for the opportunity to win a Presidential Scholar in the Art. Enter by Oct. 1.