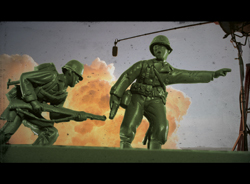 Lighting a Fire Under Budding Filmmakers

The guys in my neighborhood never thought of G.I. Joes as dolls. Maybe because we didn’t care as much about the uniforms, boots and helmets we decked them out in as we did the melting point of the plastic and whether or not gasoline would ruin the kung-fu grip action.

Between our crew of guys—the Golden Acres Gang—that grew up together, we could easily muster a platoon of Joes that had (mostly) functioning arms and legs and intact heads. Feet and hands, though, were dicey; they seemed to be the first to go when the going got tough. And you could tell the Old Timers from the Newbies—they had two left feet or two right hands (even arms), depending on what we could get to stay attached. If we needed a crowd or spectators to the carnage, there were at least a dozen more Barbies and Kens to be had from our sisters.

Early on our gang was content with pouring gas in the jeep and sending a flaming recruit (usually missing a hand or leg or both) careening down the St. and into a pile of dead leaves. Flames were good. More and bigger flames were, of course, better. By junior high, the time and effort spent on better realism—horrendous conflagrations, bits and pieces of a “plot” and explosions courtesy of leftover Black Cats—had grown exponentially. But when we discovered my parents’ wind-up 8mm camera gathering dust in a drawer, things got serious and, little did we know, careers were launched.

My friend, Alec Shepherd, stepped easily into the role of director largely because he and his two brothers had a good-size enlistment of G.I. Joes at their disposal and because he had learned to make really good fake blood. The rest of us half-dozen Golden Acres guys were eager grips, gaffers and general assistants being more than happy to pull a string, throw a match and otherwise work behind the scenes. We were psyched how well the scenes we created, and later filmed, turned out. Cheesy and blatantly fake—along the lines of Johnny Sokko and His Flying Robot—they were redeemed with decent action and flames.

Today, Alec works in Hollywood as a grip. Several months ago he was working on the film G.I. Joe; The Rise of Cobra. For some reason, delays of hours at a stretch, day after day, set the whole crew to finding ways to kill time.

Not one to waste a good set and the accompanying access to props, gear and accoutrements, Alec began bringing some G.I. Joes (probably pilfered from his young son, Cole) to work and recreated Apocalypse Now using somewhat crude model sets that he made. The cast was enthralled at this film-within-a-film and Alec’s self-shot dailies were impressive. Even the director of photography, Mitchell Amundsen, would stop by during the incessant delays and ask rather sardonically, “So, how’s YOUR film coming today?”

The final product ran on You Tube for a brief time, but Alec had to take it down; something about copyright infringement or something. Oh, and the borrowed soundtrack from the real G.I. Joe movie didn’t sit well, either.

Considering that a couple of dozen G.I. Joes were asked to make the ultimate sacrifice when we were kids, the price they paid enabled my friends to taste what it was like to make a movie. And that flavor remains to this day. And to (badly) paraphrase Robert Duvall from Apocalypse Now, “We loved the smell of gasoline in our neighborhood. It smelled like…making movies!”