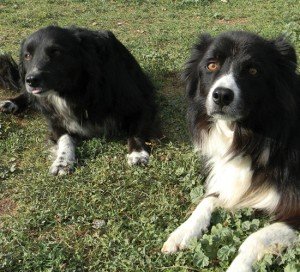 When I adopted Bart (short for Slartibartfast) from the Boulder Valley Humane Society, he was relatively young—about nine months—and without a name. Despite nearly dying of parvo virus curled up in my basement the day after I brought him home, he has been a great dog.

Does he catch a Frisbee with fighter jet speed and dexterity? No, but he is an affectionate companion, has personality to spare, is a good listener and a loyal friend.

But I felt guilty having to leave him at home all day while I was at work. Sure, he has a half-acre yard to run around all day and honey bees to bite at. But I thought he needed a friend, another dog with which he could run and play and share the day.

So it was with this idea in my mind that I contacted a border collie rescue group. They introduced me to Chadd—he came with a name to which I added a “d” to better reflect his unrelenting enthusiasm and drastic attention deficit issues. Chadd was 5 when I adopted him, about the same age as Bart, and he loves playing catch with a Frisbee. That is until something else—a goose, passing cyclist or car—catches his attention.

If I had it to do over again—and I knew then what I know now—I can’t say I would make the same decision. Chadd is a kind and loving dog, don’t get me wrong. If he would just look up when I throw the Frisbee, he would be catching 1,000. And I’m pretty sure he’s living the good life out on my farm, herding the geese around the yard, running in the fields and going for swims in the creek across the street.

To get a reality check, I consulted Brett Endes, a “canine counselor” in Longmont. He said my intentions were good but a dog is fine hanging out all day by him or herself, as long as I am present (throwing a Frisbee, interacting, going for walks) with them when I’m home. Which I am.

“If things aren’t going well while you are around, you’re not giving them any quality time while you are home, that’s where things can go wrong,” Endes said.

But it’s been a rocky road with Chadd, and is to this day. Chadd has a tendency to do his business in the house, on the carpet, as opposed to outside on the yard. It’s not a regular thing; I’ll just find his mess some random morning or at night before heading to bed. This led to him getting put in his kennel at night, which pretty much solved the problem. But it was nice to have him hang out in my room and, on cold nights, on the bed.

I’m not sure if he has some issues from his past owners (I don’t know about any abuse or other traumatic problems), but he can be highly skittish. Like when he sees the fur brush or when I fill the kiddie pool for his bath. Chadd tends to bark and snap at Bart when they go running through the yard to bark at a passing car with a dog hanging out the window. But again, not always.

I try to use Bart as the example because he just takes it all in stride; the brushing, the baths. Bart has never had an “accident” in the house. Although he did chomp a chicken once, which he ended up wearing for several days. That solved that.

Chadd remains the problem child who wants to bite the brush that grooms him. At Endes’ suggestion, I’ll continue to work with him and play catch and enjoy his help in rounding up the birds. But after talking with Endes and seeing what the results are, I would not recommend adopting a second dog as a friend to the first. Better to focus your attention on one furry friend at a time.