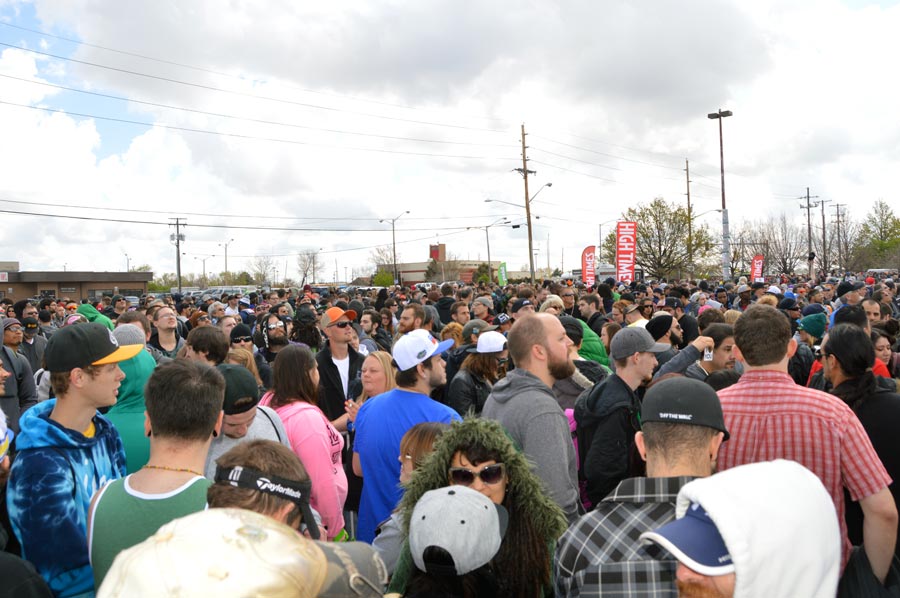 People from around the world come to Denver once a year to partake in the event best known as “The Cup”. The High Times Annual Cannabis Cup is a competition amongst growers and business owners that are active in the cannabis industry. Contestants submit their finest products to be tested, smoked, and rated based on criteria such as aroma, taste, appearance, and high.P

Contest aside, the cannabis cup has much more to offer than competition amongst professionals. As an attendee, I was able to see some of great new innovations of the cannabis industry, discuss specific grow techniques with professional growers/breeders, and even sample product from a number of out of state companies. One of my favorite aspects about the Cup is being able to meet the assortment of people that this industry now attracts.

I met people from all walks of life, from all over the country and world. While waiting in line among all of the eager tokers, I met people from New York, Pennsylvania, Georgia, California, Florida, Texas, Oregon, Washington, Spain, and Italy. The attendees had a wide range of ages and occupations, ranging from 21 up to 75. Some were college students, some were entrepreneurs, and many retirees. Everyone seemed to have a buzzing exuberance about them, anxious with anticipation of what the Cup had to offer.

The high times cup posted to inform people that the event would begin at noon sharp, and in order to avoid waiting in a long line to arrive at 9 AM. Having a slow morning, I decided to arrive at the event at 11 am and I still found myself amongst hundreds of people. The gates didn’t open up until 12:45 and only began letting a few people in slowly. Eventually the event staff got their bearings straight and the crowd began to flow. Once ticketing was done and the event was hopping, I found myself among vendors offering anything from chiropractic services to cannabis seed banks. The vendor selection was split between indoor and outdoor areas, indoor which remained a non-smoking area, and outdoor where you could smoke to your heart’s desire.

As I exited the main building, I was greeted with a cloud of smoke, more like a general haze that settled over the crowed and booths. With the aromatic fragrance of cannabis in the air, I began I marched forward, exploring everything the cup had to offer. The booths that each company had was widely varied and each offered something very different. Some booths had just a table and banner with brochures explaining their company, another company had a trapeze artist doing acrobatics suspended in the air on ropes.

From my perspective, people in attendance had one of three main goals for this event:

I will explore some of the aspects of the Cup that lends itself to each of these three areas.

People looking to learn more about the industry and its progression were pleasantly surprised to find a number of innovations in the industry. The first I would like to note is the number of LED light manufacturers boasting their low costs, low running temperatures and highly resinous, large buds. Currently the industry is focused on using High Pressure Sodium lighting in order to flower their plants and obtain big yields. However, as the industry evolves and technology improves, LED lighting is becoming a major competitor for market share.

Currently dabbing technology is generally limited to one of two areas: Flame heated nail to smoke off of and the E-Nail which maintains a coils temperature electronically that is loosely fitted to a nail to keep it hot so you can dab. Many companies saw this as an opportunity to innovate and have begun moving away from the torch and long cords to cordless, battery powered units that maintain temperature in a safe way for efficient, temperature controlled dabbing.

Industry professionals in attendance had a great opportunity to network and listen in on forums held by leaders in the industry in areas of growing, edibles, politics, and marketing. Beyond the forums, people were able to speak with wholesale vendors for new products, glass blowing companies, nutrient suppliers, and seed banks.

Now, those looking to have a great time, smoke a lot of weed, and socialize with their fellow tokers had some great opportunities as well. Many of the out of state vendors from California and Washington came bearing product to share with all and let people sample some of their finest herb, newest glass, and flavorful concentrates. It seemed that dabbing was a crowed preference and people formed lines to get their chance at sampling some of the shatter and wax that those companies had to offer.

Many Colorado companies had pulled back on offering any sort of samples this year. The Marijuana Enforcement Division made a state wide claim that any licensees from the state of Colorado that were offering any free samples of any cannabis or cannabis concentrate will be in direct violation of the state legislature. As a result, much of the attention was drawn towards out of state companies. Regardless, attendees were able to consume as much as they desired, and do so responsibly.

In summary, I found the 2015 High Time Cannabis Cup to be a roaring success. It’s a wonderful feeling to know that a booming industry, once suppressed by legal boundaries, is beginning to express its professionalism as well as its sense of community. This Expo is a true testament to the ever evolving industry, culture, and acceptance of cannabis as both a recreational and medical aid.