Tales of the Northern Coal Field: Tools of the Trade 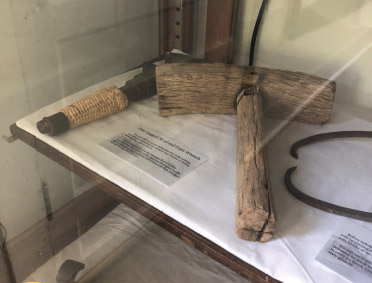 Coal mining was the foundation of Lafayette, but settlement of the area began with the homesteaders. While the Civil War raged in the east, thousands came west to homestead. By an act of Congress, anyone who went west, built a house on some land, and farmed the land, could own that land. Homesteading carried the risks of starvation, disease, and financial ruin, but the opportunity for a new start, in a new land, drove many onward.

The earliest homesteaders in what is now Lafayette included Adolph Waneka (1860) and Manning and Julia Harmon (1861). The Miners Museum in Lafayette features several artifacts from their families, a window into our heritage. The museum’s farming artifacts never fail to fascinate visitors. They speak to a world, and a values system, that has long since disappeared. It was a world where things were made to last, even when they seemed broken beyond repair.

In the middle of our farm exhibit, there is a wrench that belonged to the Harmons. After years of use, the handle wore out. A new handle was furnished, made from a used corn cob. Next to the wrench, there is a one-legged stool, perfect for milking cows. It was made from the spoke of a broken wagon wheel.

Last, and most unusual, is a chair from the Harmon farm. It is made with the hide of an ox that died on their journey from Illinois to Golden, Colorado, almost 160 years ago. While the top of the leather seat is black and brittle, on the underside of the seat, you can still see the hair from the ox’s hide.

These artifacts recall another way of life. Back then, a quill pen (and later a fountain pen) would last your whole life. Now, pens come in bags of a hundred, each one intended to last a week at most. A mass-produced wrench costs ten dollars at the hardware store down the highway. For a homesteader, working just to survive on the plains, a new wrench meant more than just money, it meant a day’s journey by horse to the mining camps of Boulder. A wagon, or an ox, were huge investments, bought with months of work. Even if they broke, or died, to just throw them out was unthinkable. The life of a homesteader did not merely reward hard work and resourcefulness, it demanded it. 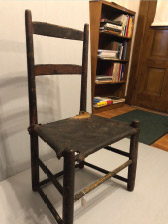