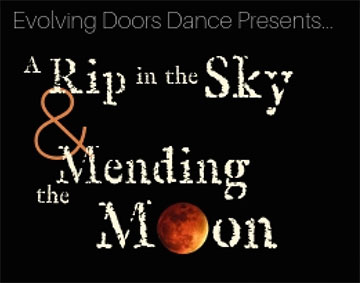 Evolving Doors Dance, a staple in the Front Range contemporary dance scene, is back with their first full-length performance in two years. A Rip in the Sky & Mending the Moon, a premiere of contemporary dance, theater, poetry and original music, opened on Thursday, March 7 and runs until March 9 at The People’s Building in Aurora. The 75 minute piece weaves together multiple disciplines in an exploration of approaches to “tearing, fraying, unraveling, and…the sometimes unfathomable task of mending.”

The cast, assembled from dancers and actors, each bring their own unique skills to the stage. Some of the performers also brought their own written essays and poetry to the creative process, which comprise the spoken portions of the performance. Whatever their main discipline, all cast members speak and dance. The shifting focus from words to dance to the ways they mingle brought layered interest to the work.

Among the cast members were the Evolving Doors Dance company directors, choreographer/dancer Angie Simmons, and composer/musician Amy Shelley. Simmons and Shelley share life as a married couple as well as sharing a partnership as artistic collaborators. They have worked together for many years, learning to seamlessly interweave their personal and creative lives. It is lovely to hear the way a blanket reminds Simmons of their shared history in a snippet of dialogue. Their success in working well together is evident with A Rip in the Sky’s overarching theme of relationship.

Shelley’s sound score provides an ambient backdrop, sometimes adding an urgent element to the performance, such as when Shelley hits the drum set during a dance duet. Pre-recorded sounds are mixed with live music in an abstract soundscape, allowing the sounds to be interpreted by the listener. At one point, I imagined that I heard scissors sliding through fabric.

From sewing lessons and brief lectures on cultural fabric traditions, to shrouding the dancers, cloth is laid out, literally and metaphorically, quilting together the assorted elements of dance, poetry, memory, and music. Though sometimes the performers speak of repairing cloth, the dancers’ bodies intertwine, pulling together, pushing away, speaking of relationship. From there, the language flows into poetry about loss, or desire to reconnect, while bodies strive to make contact, or dancers tie fabric to form a bridge.

Outstanding among the spoken and danced elements was a piece written by Simmons which reimagines Homer’s Penelope weaving and unweaving a shroud in order to maintain her rulership as a single female.

The Mourning Star by Ian D, a poem about his empty feelings after the passing of his mother, was emotionally potent.

Throughout the evening, the dance held steady, supported by the musical score, while the stories provided emotional context and variety. The assorted narratives come together, not like a story with linear plotlines, but like a quilt the performers have sewn together and laid gently across the stage by the end of the show. The dancers conclude the show by spreading scraps of fabric upon the stage floor, lending visual imagery to this perception.

The piece is presented “in the round,” with the stage in the center of the audience. This is a different configuration than the standard proscenium stage presentation, with its imaginary “third wall” separating the world of the performers from the audience. The “in the round” presentation offers a more intimate experience to the viewer, freeing the performers to direct their actions to all sides of the stage. The audience members each experience a unique viewing of the piece, but are more connected by facing one another. At times, my eyes drifted outward from the performance to another audience member’s face. Their experience of watching became part of the performance, giving a feeling of being “in this together.”

As a dancer and choreographer, it was a pleasure to return to dance as an audience member to view A Rip in the Sky & Mending the Moon. I found familiarity in the gestural and grounded movement style that seems to grow locally. The Front Range is home to a creative contemporary dance and theater scene, producing experimental, immersive or multidisciplinary work like EDD’s A Rip In the Sky & Mending the Moon. Like EDD, these companies are artist owned and produced, crowdfunded ventures. These hidden gems are worthy of  attention, and should be sought out whenever possible. 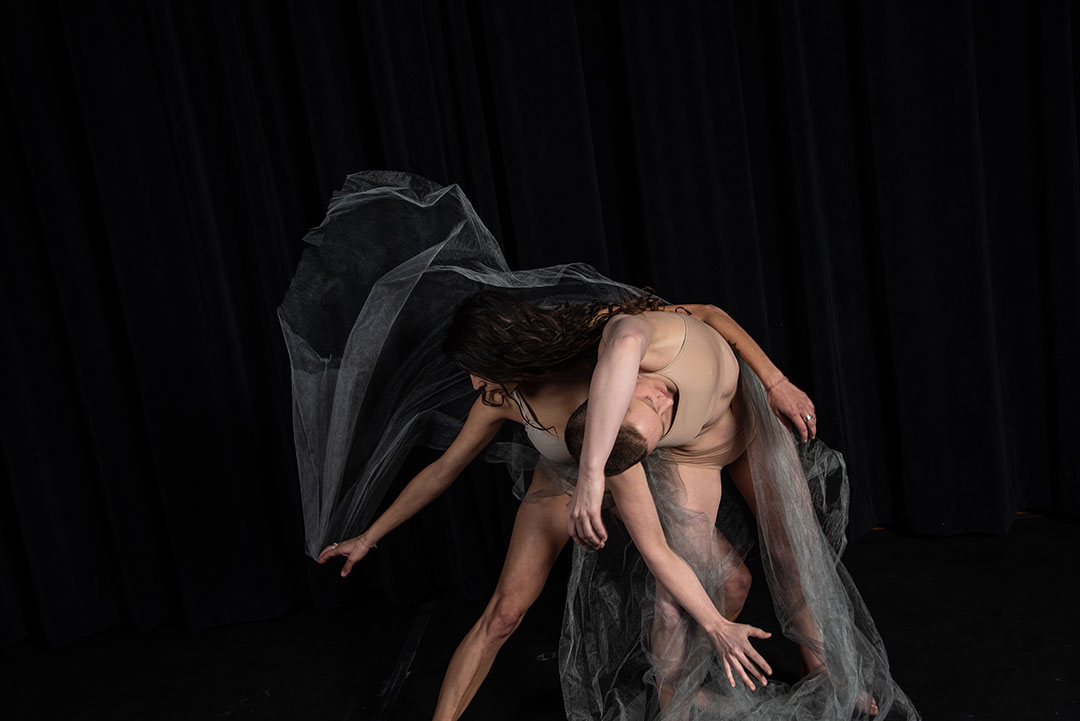