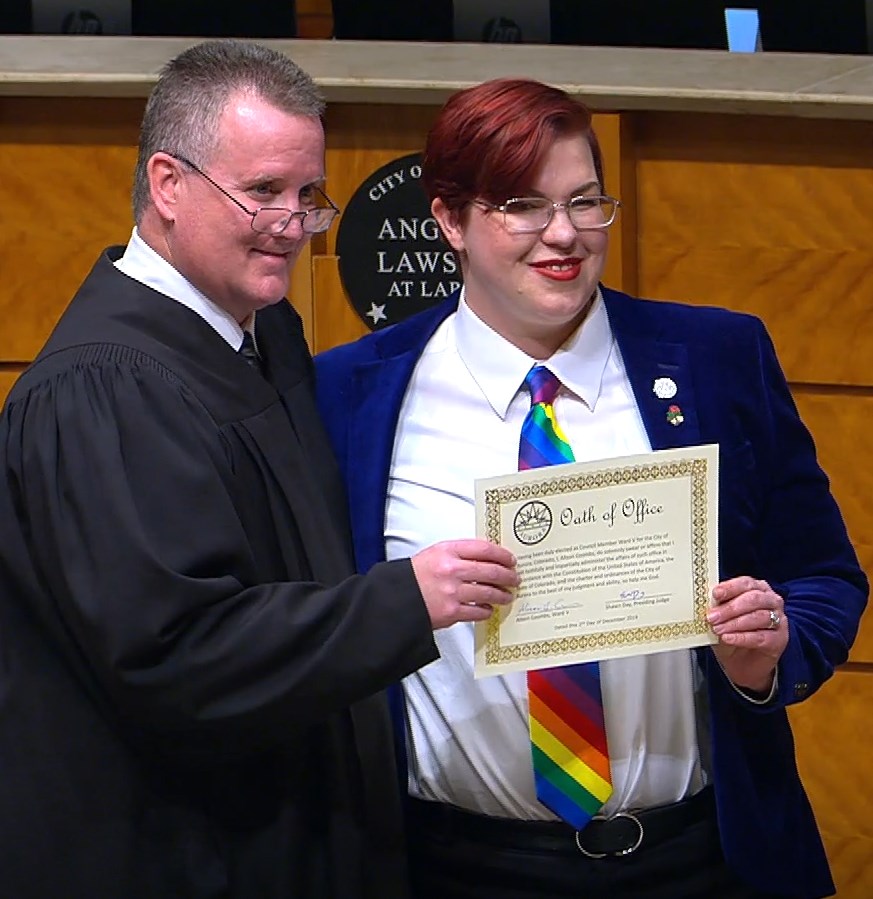 Below is a press release sent to us by LGBTQ Aurora Councilwoman, Alison Coombs, regarding the call for her resignation for speaking out against police brutality.

Aurora is the same police department that has a long history of violence against its own residents and in the case of Elijah McClain – his death.

Two weeks ago, 1000 Erie residents came out and marched against Racial Injustice. They were joined by the Mayor, the entire Board of Trustees, and the Police Chief.

Representatives Leslie Herrod and Jonathan Singer were in Denver on the first day of protests.

Elected leaders across the country are standing with Black Lives Matter.

What makes the case of Alison Coombs different?

Yellow Scene Magazine has seen our own share of hate mail and online attacks for criticizing Trump, for featuring the DiverCity series, for insisting that masks save lives, for criticizing the Iraq war, for questioning gun laws, the list goes on.

What we do know is that the level of hate being conveyed by those retaliating against Councilwoman Coombs and others must end. This is the same violence that has led to churches being bombed, supremacists running over protestors, and the deaths of too many people at the hands of police.

Background: On June 15th, Councilwoman Coombs made a personal Facebook post expressing solidarity between the LGBTQ+ community and the ongoing Black Lives Matter uprisings. Four days later, Fraternal Order of Police Lodge 49 President Marc Sears located this post, and shared it on his group’s Facebook page, which began to attract attention from police and families of police across the country. They began to comment en masse, often in blatantly homophobic and threatening tones. Councilwoman Coombs set the post to private on June 20th. That same day, Fox 31 ran a story on the issue, featuring a heavily truncated statement from Councilwoman  Coombs, and an interview with Marc Sears, who called upon Ms. Coombs to resign. Denver 7 News ran a short, pre-recorded interview with Ms. Coombs on the 21st.

Messaging Guidelines: Messages on this issue can be left on Councilwoman Coombs’ official Facebook page, on comment threads attached to relevant news stories, or submitted as comments during Public Invited to be Heard during official Aurora City Council meetings by emailing publiccomment@auroragov.org. Messages submitted to council can be either written, or recorded, but in both cases must be under 3 minutes in length.

Topline Message: This is a manufactured controversy created to distract from the fact that FOP is on the wrong side of history. Ms. Coombs stands by her comments, and is saddened that this issue is distracting from the much-needed policy that will protect our black neighbors from an out-of-control police culture.