Off Menu with… Brian Pierce | Gemini 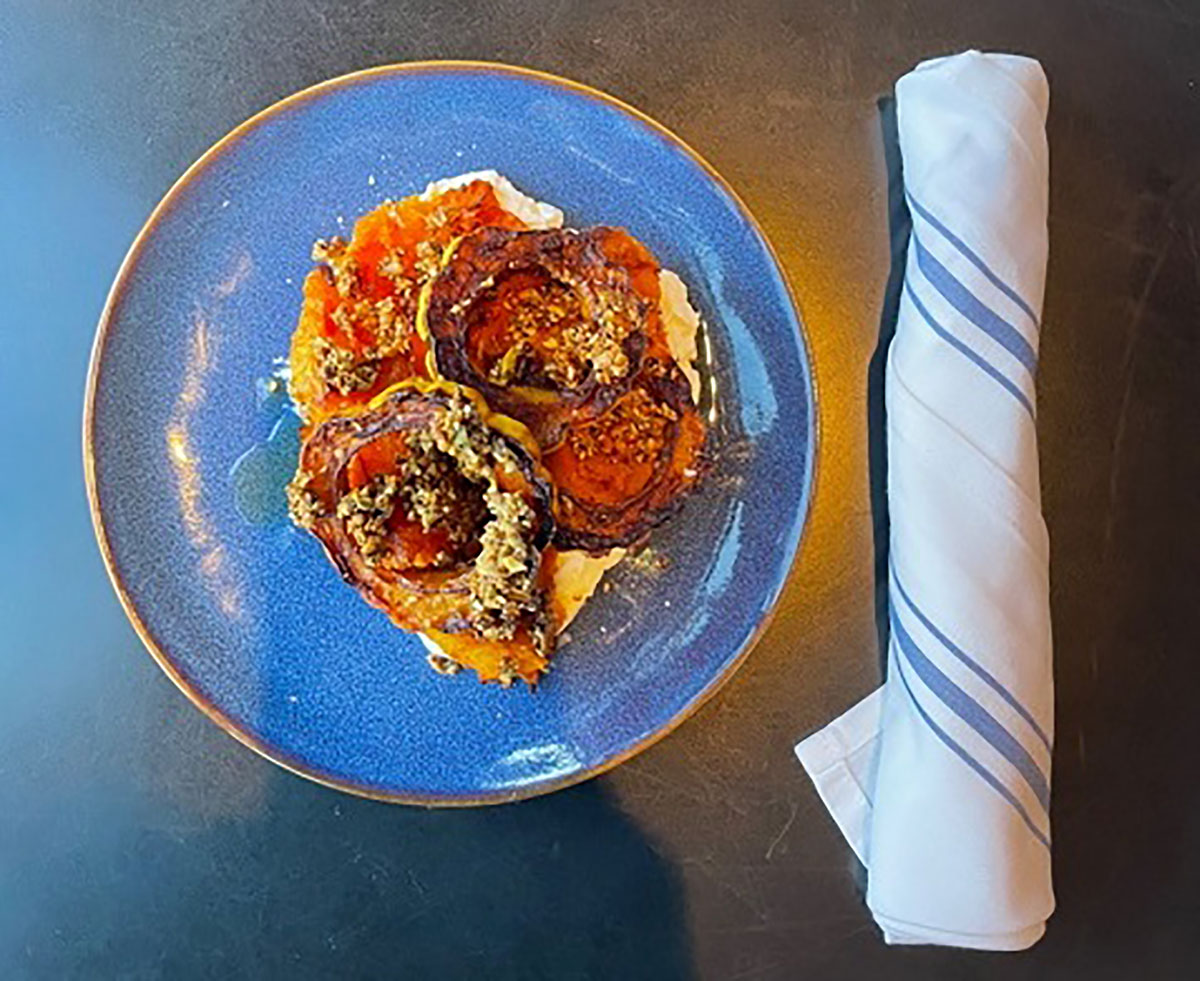 Prior to the start of dinner service on a Saturday night, I made a request of Brian Pierce, executive chef and part owner at the newly opened Gemini. I ordered his roasted squash with yogurt and brown butter dukkah, and then asked him to allow me to photograph him with it. Simple, right? Not for us.

The request involved cooking in Gemini’s smaller, dining room visible kitchen – possibly the easy part. Then came a hunt for photo locations with the best light. As we worked through options, we settled on a spot by the front entrance, requiring a small amount of patience from diners heading inside while he got comfortable posing and I framed the shot, took the photo, and then enjoyed what he cooked…

The experience told me a lot. It gave me a sense of customer anticipation of the restaurant, of Pierce’s humility, and of the way he combines his flavors. This last part, especially, will keep me returning to Gemini.

Before I put him on the spot, I learned a little about the person behind the pots, burners, people, and menu at Gemini. He’s cooked in New York City and worked as a private chef in Aspen during COVID-19. “There was a lot of dropping things off on people’s doorsteps,” he said.

I also learned that once he left New York City, but before returning to Colorado, he and his wife traveled throughout Asia on what he called a  “honeymoon sort of excursion” for four months. “We didn’t know where we were going to land. There was the possibility we were going to stay there for a few years, but it didn’t work out,” he shared. 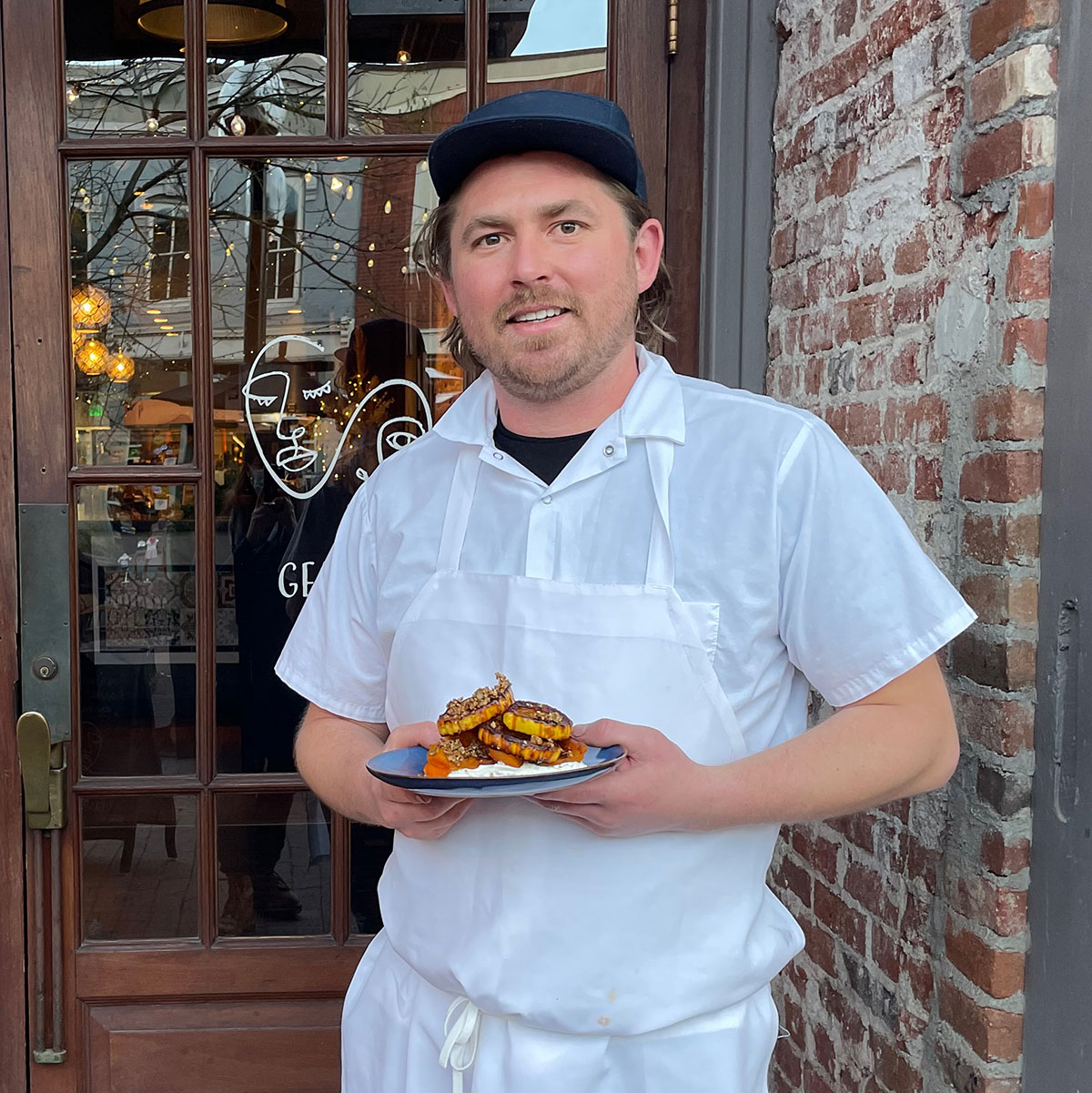 Pierce’s roots are firmly in Front Range suburbia. Gardening with his father in an oversized plot behind their home was one of his first food experiences. “I would help him weed, till the beds, water, pick strawberries,” he told us.

The food they grew was often cooked by Pierce’s mother. Later, when it occurred to him that he’d need to cook for himself in college, he called his mother and she talked to him about how to make one of her core recipes, rice pilaf, which he still makes for clients today.

Family is important to Pierce, and it’s at the core of what Gemini is all about. The restaurant is named for Pierce’s wife Elizabeth and her twin sister Catherine who, along with Catherine’s husband, Michael, rounds out the ownership crew and helps with management.

New York City gave Pierce some of his most formative food experiences. He ran the food program at the Brooklyn Winery where he realized he wanted a career in food. He also worked closely with multi-year James Beard Award nominee and finalist, South American-born Ignacio Mattos at his flagship restaurant Estela.

Pierce ran the garde manger station with Mattos. “He drove the kitchen. It was all about getting everyone on the same track. At times it was very intense, but his rough energy could be both stressful and uplifting.”

After working with Mattos, Pierce returned to the soil, farming again in central Western New Jersey and then joining restaurateur Andrew Tarlow’s group where he grew his skills further and, one night, cooked for former British Prime Minister David Cameron at the Italian restaurant Roman’s.

Eventually he and his wife found the Front Range and now run the kitchen at Gemini. “Now I empower people to bring their own twist to the kitchen. I try not to be overbearing and try to allow them their freedom.”

Finally, once we talked about his past and his leadership and figured out our photo, I enjoyed a glass of Basque white wine with the savory-spiced, honeyed squash and yogurt. While talking, Pierce discussed his focus and what diners can expect of the current and future plates on a menu that currently includes things as varied as octopus, seafood, meatballs, albondigas, and a Spanish omelette.

“Everyone I’ve worked with has contributed to what I’m doing here,” said Pierce. ”And I don’t try to dress things up too much. I let the food and the flavors speak for themselves.”