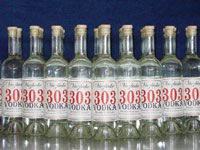 Potatoes, not grain, are at the heart of this smooth family enterpriseJames Burrusby James Burrus
Published on: August 17th, 2009

The story behind 303Vodka is almost as good as the smooth, 80 proof potato concoction it describes. Almost.

Turns out that Steve Viezbicke was going through some family belongings after his father (Pete Jr.) died in 2005 and found the steamer trunk his grandfather (Pete Sr.) packed with everything he owned when he immigrated to Boulder from Poland in 1907. Tucked away in the torn lining of the trunk was a hand-written recipe for potato vodka.

Fast forward four years and Steve, a laid-off physicist who had been dabbling in the art of distilled spirits since college, translated the recipe one word at a time using the Internet. He gave the instructions a try, overhauled the proportions to make 55-gallon sense out of a 5-gallon recipe and began distilling the fermented wort in “Bertha,” a Frankenstein-esque assemblage of stainless steel parts and pipes, which lives in a rented east Boulder garage.

Viezbicke and his wife, Terri, daughter, Brandy, and son, Brad, share in the business duties and filled the first bottle of 303Vodka in May. They have since grown their distribution to include 36 liquor stores and 15 area restaurants.

303Vodka is one of only 15 licensed distillers in Colorado, and the first since Prohibition in Boulder (although “based” in Boulder, Vodka 14 is made in Idaho).
“I’m self-distributing,” Steve said. “There’s a big push for locally produced products, so we rarely have more than two cases on hand at any time.

“You’re looking at our life savings,” he added, gesturing at the collection of second-hand materials and “stuff” gleaned from trips to ReSource 2000. “We get excited when we can make rent.”

So far, response has been consistently positive. Steve said a tasting at Liquorland in Longmont sold more than a case during the hour or so they were offering samples.
And it’s no wonder. Unlike vodka from grain, 303Vodka uses potatoes—which is a rarity these days—and a continuous distillation process that produces an unfiltered end product that has a smooth, velvety feel in the mouth. If tasted side-by-side with any of the Big Names, will certainly show off its hand-crafted superiority.

With the growing popularity of their spirit, the Viezbiekes are in the process of making two more stills to meet demand.

Don’t Get Shut Out
The Great American Beer Festival just keeps getting better. But it’s not getting any bigger. And according to sales stats on its website—greatamericanbeerfestival.com—tickets for the three-day event are already more than half sold (as of my mid-July deadline), so don’t be left crying in your beer. Get online or head over to your trusty liquor store, brew pub or restaurant (listed on the web site) and get your tickets TODAY.

Check back here next month for a run-down of notable Colorado establishments in attendance at the festival, as well as tips and dos and don’ts for making the most out of sampling the 1,600 beers on tap.

A Pour-man’s Guide to a Full Pint
Few people would know that the finger-width layer of foam atop your 16-ounce pint glass actually means that about 25 percent of your beer is missing. But if you carried Chris Holloway’s BeerGauge credit card-size device, you could prove it.

By day, Holloway studies how electromagnetic waves interact with objects and materials. But in his spare time—miffed after a bartender shrugged off his complaint he was short a fourth of his beer—Holloway designed the easy-to-read Beer Gauge to keep inattentive barkeeps in check.

Of course, beer connoisseurs will appreciate some head on their draft, but this could be a great tool for the cost conscious. Selling for $2 (thebeergauge.com), the gauge shows what’s there and what’s missing ounce by ounce.