Boulder Police Officer Waylon Lolotai is alleged to have an Instagram account, @tacticaltoa, on which he frequently speaks positively about police brutal and violent use of force. This includes his (alleged) comments about an officer punching a man another officer already has in a chokehold: “Atta girl, doing work on that suspect, dropping hammers.” In response to a commenter calling this excessive force, Lolotai (allegedly) writes, “it made me happy that she was dropping bombs on his stupid face.”

Boulder City Attorney Tom Carr has referred to Lolotai as “an excellent officer who does a great job,”but as a result of what looks to be Lolotai’s social media commentary, this “excellent officer” is now on paid administrative leave. Lolotai’s alleged Instagram account, on which “Use of Force Fridays” posts promote violent police action towards suspects, came to the attention of Boulder Police via a video on the SAFE: Safe Access For Everyone Facebook page.

Yellow Scene readers may recognize Lolotai’s name, as I have written about Boulder hiring him while he was part of an active investigation for excessive use of force as a deputy at the Denver jail. Since he was hired in 2016, he has brutally assaulted two women fully half his size, as well as a Black man, Sammie Lawrence IV, who clearly and repeatedly shared that he was disabled, just before Lolotai tackled and arrested him for, in part, not putting down his walking aid. One of the women, Kelly Clark, was unsuccessful in suing Lolotai and the City of Boulder, because, in part, the judge did not feel Lolotai’s shoving her so hard she flew through the air, after only an instants warning to step away from him, met the standard of shocking the conscience.

But that was then, and this is now.

The vicious police killing of George Floyd has driven our nation to the streets. Locally, Aurora Police Department stopped a young Black violinist, Elijah McClain, who was walking home from the store; that stop quickly escalated into brutal physical restraint, involuntary drugging, and death. Protesters have been persistent in calling for an end to police violence against Black people, even in the face of President Trump sending provocative federal agents who are understood to have escalated tensions in Portland, Oregon, before the federal officers left (and protests reportedly quickly returned to something approaching peaceful).

The Aurora officers who used what so many have called excessive and unnecessary use of force against McClain have so far been exonerated of any wrongdoing for their actions that led to his death. But like Lolotai, those officer’s showed a disregard for excessive use of force, sharing pictures of themselves grinning and placing an officer in a mock-chokehold at a memorial erected for McClain (three of those officers were subsequently fired). Like those officers, it is not Lolotai’s blatant and repeated violent use of force that has put his job at risk, but his callous disregard for such use of force shared publicly.

It remains to be seen whether Boulder’s City Attorney continues to defend officer Lolotai. Perhaps the new Chief of Police, Maris Herold, will see Lolotai fired, rather than defended—as the Boulder Police Department did under former Chief Testa.

An interesting end to this story comes by way of the U.S. mail. To my private residence, at my unlisted address, one day after learning of Lolotai’s paid administrative leave, I received a postcard: “Aloha From HawaiI.” On the back it read:

Thank you for the paid vacay! XOXO, The Ls. 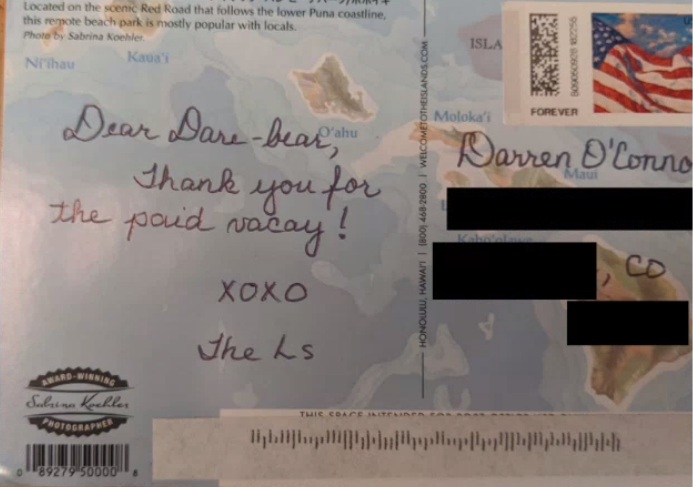 No one I know is on vacation in Hawaii, and almost no-one knows my address. I’ll leave it to our readers to decide how likely this was to be a gloating or threatening message to me for publicly and privately calling out this piece of work that should never have been given a badge. Luckily I have long taught my daughter to keep the door locked and don’t open it for strangers.

Darren O’Connor is Regional Vice President of the National Lawyers Guild SW Region and a practicing attorney in the areas of eviction defense, family law, criminal defense, and civil rights. He is the criminal justice committee chair for the NAACP Boulder County Branch. He can be reached at DOLawLLC@gmail.com