It is critically important that Trumpism—a political phenomenon that represents an updated version of classical fascism—is politically defeated. And this must mean a massive, overwhelming defeat for Trump in the November election.

I cannot imagine the circumstances in which Trump will leave office willingly, and thoroughly expect that he will attempt to cling to power by any means. If he succeeds, we could be at the moment Italy experienced in 1922, and Germany in 1933. Defeating this attempted power-grab will entail massive mobilization in the streets—and after this year’s BLM uprising, I’m more optimistic that progressive forces in the country are up to the task. But it will also entail his unambiguous defeat at the polls.

Failing an unambiguous defeat for Trump in the Electoral College, his defeat in the popular vote will still leave us better positioned to mount resistance. Which is why this is not just a matter for people in swing states. The worst-case scenario—by far—would be his unambiguous victory.

I don’t need to be lectured about what a domesticated Beltway mediocrity Biden is. I already know. And even if (¡ojalá!) he wins, the country is still going to be in deep crisis—more politically polarized than at any time since the Civil War, worse economic conditions than at any time since the Depression, the deadliest health crisis since 1918. So merely going to sleep after a Biden victory isn’t going to be an option anyway. A mass movement strong enough to defeat Trump’s power-grab could also be strong enough to press its offensive against Biden, and wrest concessions to a progressive agenda—or even (much more ambitiously) begin to build parallel power.

I’ll add that contrary to the worse-is-better logic of some, mass movements tend to do better under Democratic presidents who at least feign progressive sensibilities. An obvious example: the Standing Rock occupation came in the final months of the Obama administration, and his last-minute moth-balling of the Dakota Access pipeline was a case of direct action getting the goods. It never would have happened if not for the hundreds of brave souls who camped out and faced police repression on the frigid plains of North Dakota for weeks in the fall of 2016. But it was also predictable that it would be promptly reversed under Trump—as it was. The pipeline officially opened in June 2017. And while the Standing Rock Sioux have continued to fight it in the courts, there has been no further protest mobilization.

Similarly, Occupy Wall Street and the labor protests at the Wisconsin capitol building were under Obama. The high noon of the anti-globalization movement was the Seattle protest of 1999—when Bill Clinton was in office. The anti-war movement was at peak power in LBJ’s final two years in office, and began to wane after Nixon’s election—even as the war escalated. Workers occupied the General Motors plant in Flint, Mich., in 1935, at the height of the New Deal era. And until the murder of George Floyd, it had been entirely too quiet under President Trump. The notion that the masses are lulled to sleep by Democrats and spurred to action by Republicans strikes me as a simple reversal of reality.

Spare us the bogus equivalism. If you do not acknowledge a difference between fascism and bourgeois democracy, you don’t know your history. And you can stop throwing the word “fascism” around to describe anything you don’t like, if you don’t know what it is. Trump is a fucking fascist. Biden is not.

I’m getting the bogus equivalism from two distinct tendencies of the lefter-than-thou crowd: third-party voters (in which I’ll include Bernie-or-busters, now that it has come to bust) and anarcho-abstentionists. So a few words to both…

First, you third-party voters and Bernie-or-busters… You are confused on a fundamental point. It is not us cynical realists prepared to vote Biden but you all who are full of illusions. There are two related illusions at work in your mentality. The first is that a Bernie Sanders or any progressive candidate would be able to remain true to a progressive agenda, and would not become an enemy immediately upon entering the White House. It is a question of degree, but nothing more. It is the nature of the beast—to bestialize those who wield imperial power, as Che Guevara put it. A President Bernie might have been a lesser enemy than a President Biden, who in turn would be a (significantly) lesser enemy than a President Trump. But they would all still be enemies.

Which brings us to the second dangerous bourgeois illusion—that voting is an expression of your personal purity, rather than a tactical move as on a chessboard, that you are somehow contaminated if you vote for a lesser-evil candidate. It boggles my mind that people who burn fossil fuels and wear clothes made in sweatshops every damn day (as we all do) can have such a romanticized view of voting. It’s just a damn vote. Get over yourself.

I will add that Bernie himself is urging y’all to vote for Biden, so it’s amusing to see you acting more Catholic than your Pope. I’ll also add that I see no third party that is worthy of our support. I was able to build up a lukewarm enthusiasm for Bernie, but the Green Party simply has terrible politics, and is 100% morally bankrupt. If I have explain why you just haven’t been paying attention.

OK, now you anarcho-abstentionists… I hate to tell you, but your equivalism is not the pure anarchist position you seem to think it is. When Franco launched his putsch against the Spanish republic in 1936, did the anarchists of Catalonia sit it out, saying “not our fight”? Fuck no. They launched an uprising, perceiving the urgent necessity to defeat a fascist power-grab—and then, after crushing the putsch in their stronghold, pressed their advantage against the Popular Front government of the republic, and instituted a thoroughgoing revolution in Barcelona and Catalonia. How far to press things with the republic, and whether to cooperate with it, would be contentious questions in the anarchist ranks—but there was never any equivocation on the critical imperative of defeating fascism, before all else.

And as for voting…. You wanna go argue with Carlo Tresca? This is what he wrote in his journal Il Martello in 1940:

Roosevelt has been re-elected. By a large majority. “It’s all the same to us,” the distinguished revolutionist will say… “It’s all the same to us” will say those who delight in dulling their minds by a constant repetition of the sacred principles.To me it does make a difference. Willkie’s election would have froze my blood; Roosevelt’s warmed it up. I say this in all frankness and sincerity because in these times to hide one’s emotions is hypocrisy. I am not a hypocrite… [Quoted in All the Right Enemies: The Life and Murder of Carlo Tresca by Dorothy Gallagher]

We have even less reason to be hypocrites today. Wendell Willkie was the candidate of an isolationist Republican Party that wanted to keep the US out of the fight against fascism. In the US today, fascism is poised to take power at home.

Which bring me to a final point. Most of you in both camps—third-partyists and abstentionists—are acting out of privilege. It is the non-white, the immigrants, the already economically oppressed who stand to suffer the most under Trumpism. But in my experience, you glib equivalists are overwhelmingly (no, not exclusively—but yes, overwhelmingly) white and of middle-class origin. Like me—so I’m not bashing you for that. But you have to take responsibility for your privilege, and I submit that some of you need to take the proverbial long, hard look at how it has colored your perceptions of this question. 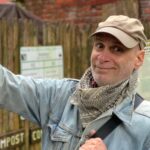 Bill Weinberg is an award-winning journalist in the fields of human rights, indigenous peoples, ecology, and war.