The mayor of Louisville, two City Councilmembers and a Boulder County Commissioner have all announced their opposition Redtail Ridge, a massive development whose fate will be decided by a Special Election April 19. Citing a variety of reasons, Mayor Ashley Stolzmann, Councilmembers Kyle Brown and Maxine Most, and County Commissioner Matt Jones all urged Louisville citizens to vote “No” to the 390-acre commercial and industrial development to be built along US-36.  Ballots for the election were mailed April 1.

The campaign to approve Redtail Ridge is primarily funded by Brue Baukol Capital Partners, a Denver-based private equity firm. In a Guest Opinion published by the Boulder Daily Camera, County Commissioner Jones expressed concern about the pro-Redtail Ridge campaign outspending its opposition by 26-1. “Nearly $50,000 of the developer’s corporate money has been used to pay for digital marketing, yard signs and other advertising efforts promoting Redtail Ridge,” Jones wrote on April 2. “Plain and simple, the developer is trying to buy the upcoming Redtail Ridge Special Election.” https://www.dailycamera.com/2022/04/02/matt-jones-redtail-ridge-vote-no-and-reject-dark-money/

Jones stressed the importance of downsizing Redtail Ridge into something more in line with Louisville’s small-town character.  “The current Redtail Ridge plan is not only too shifty,” Jones wrote. “It is too big, too tall, and too congested.”

Mayor Stolzmann opposes Redtail Ridge because of the tremendous transportation issues that will be created by the sprawling development. “The sheer volume and density of the 390-acre site will worsen the already serious transportation issues we now face,” Stolzmann wrote in a March 24 Guest Opinion published by the Boulder Daily Camera. “Compounding the problem is that the current plan does not require the developers of Redtail Ridge to pay for all the transportation problems its development creates. Taxpayers will foot the bill.” 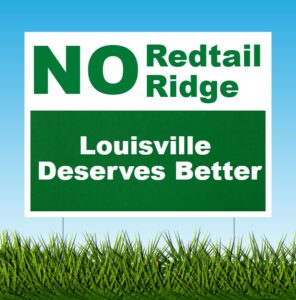 Ward III Councilmember Brown opposes the 3-million square foot Redtail Ridge not only because its size, but also the developer’s own studies indicate high commercial vacancy rates in our area. “The pandemic, Marshall Fire, and other economic factors have been hard on Louisville businesses and have made it difficult to fill existing spaces in our city,” Brown wrote. “Adding large amounts of new commercial space will lead to more vacant buildings in Louisville.”

Brown is also concerned about the quality of Open Space in the Redtail Ridge plan. “Narrow strips of proposed open space are divided by a large, four lane road and much of the public lands will actually be developed for other purposes,” Brown wrote. “Redtail Ridge falls short of the open space commitments that Louisville residents have expected from other similarly sized developments, where as much as 35-45% of the land was designated for open space and public purposes.”

The Special Election to decide the future of Redtail Ridge takes place against the backdrop of a community staggered and shocked by the worst wildfire in Colorado history. The bitter campaign has created animus and division as Louisville seeks to heal and rebuild.

Ward II Councilmember Most, newly elected in November 2021, supports the grassroots driven referendum. “Louisville is a progressive community that now more than ever – given the impact of the Marshal Fire – is acutely aware that we are in the midst of a climate crisis,” Most wrote. “Louisville residents know what’s best for Louisville and it is not 3-million square feet of dated and unsustainable urban sprawl that breaks ground on previously undeveloped land.”

Most voted “No” because Redtail Ridge is inconsistent with the community values and vision clearly expressed in Louisville’s Comprehensive Plan, a guiding document created to preserve the quality of life we are so fortunate to enjoy.

All ballots for the Special Election must be received at Louisville City Hall by 7p on April 19.