The (Un)Scrypted Lyfe of Rob Ryzin 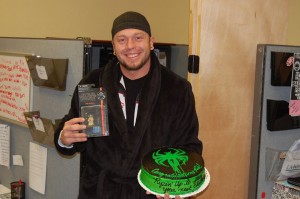 Many people look at the world of professional wrestling and immediately race to the conclusion that it’s a scripted performance that is way too over the top to be considered a sport. But Yellow Scene’s own Rob Kimball, aka Rob Ryzin, begs to differ, and has the scars to prove it. This month Rob leaves us to pursue his dream of professional wrestling in Florida, but before he leaves us we wanted to sit down with him to get our version of an exit survey.

YS: How long have you been in sales?

RK: I’ve only been in sales for 3 ½ years. Shavonne [Yellow Scene’s publisher] gave me my start in sales and marketing but I never got a formal education in the subject. Before Yellow Scene I worked various jobs, mostly physical labor type things but nothing quite like what I’m doing now.

YS: You said you’ve wanted to be a wrestler since you were five, what made you get into the sport in the first place?

RK: When I first started watching professional wrestling I really liked to emulate what I saw the wrestlers do on TV and The Ultimate Warrior was my first big idol. As I grew up I continued to follow the sport and I really started to like Sean Michaels and Brett Heart. Then when they introduced the ladder/chair matches I liked the Hardy Boys [Matt & Jeff Hardy], I really wanted to model my career after a mixture of all the wrestlers I came to love over the years. A little while ago I actually got to wrestle [Matt] in a ladder match. It was pretty cool to compete against someone I looked up to for so long. On top of that I really want to be a positive role model to everyone that looks up to me, so I live a clean lifestyle and stay away from drugs and alcohol.

YS: Do you have a catch phrase or a signature move?

RK: My signature move is the Ryze and Fall, and I also do a mean Swanton Bomb which I learned from watching the Hardy Boys. My catch phrase is: the full fledgin, straight edgin, high flyin, death defyin, above your level Denver Daredevil.

YS: Do you have an arch enemy?

RK: In the ring ya, his name is Jay Synn. We broke on to the scene together right around the same time, and at first we were a tag team duo but we broke up after a while and became rivals. We’ve had our ups and downs throughout the years, but outside the ring we’re great friends, it’s just while we’re in the ring we’re better enemies.

YS: Many athletes have their own pregame routines, do you have any?

RK: Not many no. I should stretch more, but sometimes that doesn’t work out. Before each match I like to get my mindset right, pace up and down, get really quiet, maybe listen to some music. Most of the time I’m really anxious and eat really light throughout the day, so when the 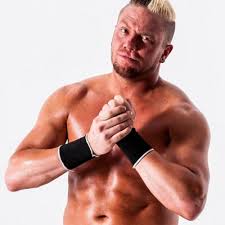 match is over I tend to eat anything I can get my hands on.

YS: You’re moving to Florida to follow your dream, do you have any advice for anyone who may want to follow in your footsteps?

RK: Never give up. There will be way too many people out there telling you that you can’t do it, don’t listen to them. A lot of people will try to tear down your dream just because theirs didn’t come true, but as long as you keep trying you can achieve anything. It sounds pretty Disney, but keep moving forward. Surround yourself with positive people who share your dream and just stay positive yourself.

YS: Finally, what will you miss most about Colorado and Yellow Scene?

RK: From Colorado I’ll miss the dry summers. I’m not a big fan of winter, which is weird because I’m a Colorado native. I’ll miss the 28 years’ worth of friendships I’ve had here and, above all, I’ll miss Woody’s Wings N’ Things. They have the best wings in the world. But I won’t miss the marijuana. Like I said I don’t do drugs, so I wasn’t a big fan of the new law. Not that I have anything against people using it, it’s just a personal standard I hold myself to. With Yellow Scene I’ll miss everyone in the office and the creative/laid back atmosphere. Everyone brought their own unique skills and personality to the work place, we became a family and it’s going to be really hard leaving that behind. I’d really like to thank everyone for the great times over the years, it’s been an awesome experience that I’ll never forget.

From everyone at Yellow Scene we’d like to thank Rob for all that he’s done throughout the years and wish him the best of luck in following his dreams, even though he’s totally pulling a Lebron. Thank you Rob, kick some ass for us out there in Florida