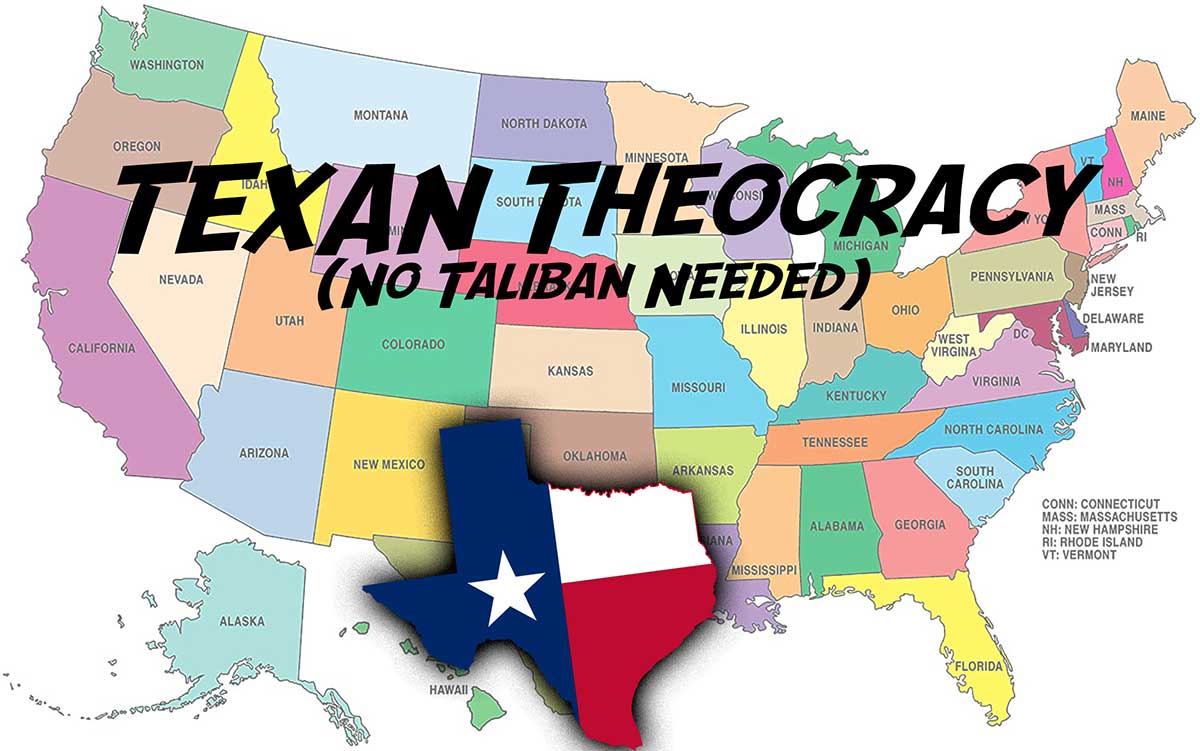 The comparison is certainly easy — it’s no wonder it caught fire. When SCOTUS upheld Texas’ unconscionable anti-choice law, SB8, in a 5-4 decision on Sept. 1 that proved out everything we feared was going to happen due to the Trump reign, social media lit up with memes comparing the Lone Star State’s legislature to the central governing force of Afghanistan.

To recap: SB8 — also called “The Texas Heartbeat Act” — was signed into law by Texas Governor Greg Abbott on May 19 and was enacted as of Sept. 1. The law establishes civil liability in the amount or $10,000 for any  person who facilitates or performs an abortion once any “cardiac activity” is detected in an embryo — which usually occurs around the sixth week of pregnancy. In other words, anyone can file a suit against the doctor, nurses, or even an Uber driver for driving a woman to have the abortion. It’s an especially awful end-around a woman’s right to choose. It enables a posse-justice mentality and catalyzes a snitch-first culture between neighbors. And most notably, there are no exceptions for rape or incest either. In short, it effectively bans abortion and flies in the face of Roe V. Wade. Attorney General Merrick Garland filed a DOJ lawsuit against the State of Texas on Sept. 9 on the grounds that the new law violates the Supremacy Clause and the 14th Amendment of the U.S. constitution, so all is not entirely lost just yet — keep planning your underground abortion railroads, however, because based on SCOTUS’s makeup, there’s not a lot of reason for optimism right now.

As for the steady drumbeat of “Texas Taliban!” metaphors, it’s not a leap — both bodies are run by religious extremist factions that seem almost exclusively designed to exert agency over what women can and can’t do in their lives and with their own bodies. But it’s also a racist analogy, steeped in base Islamophobia.

Don’t misunderstand — the Taliban deserves derision for what it does and what it stands for. But they had zero to do with what went down in Texas. And to conflate that occurrence with Islamofascism shrugs off the responsibility from where it lies — evangelical Christianity. When we point our fingers at the Taliban and say, “look at what’s happening in Texas! They’re no better than they are!” the subcontext is that these white, Christian, Texan Americans are acting like some sort of a lesser group of humans. Ya know, a brown group of people from some other country where they pray to a different God.

“It’s disingenuous,” says Safa*, a 47-year-old historian and political science professor who has also worked in public policy for state governments to protect women’s rights. She’s also an American of Palestinian descent. “This problem in Texas is an example of American Christian theocracy. When we get distracted by discussions about the Taliban, we end up with no ability to analyze genuinely what’s going wrong. It’s Islamophobic. We need to stay focused on what’s going on here socially and understand that this is an American problem.”

We don’t need the metaphor. We have our own religious extremist religious sect dedicated to the oppression of women in the name of cultish fervor. And they are white. They are Christian. And they are us.

*Last name withheld for the physical safety of this source