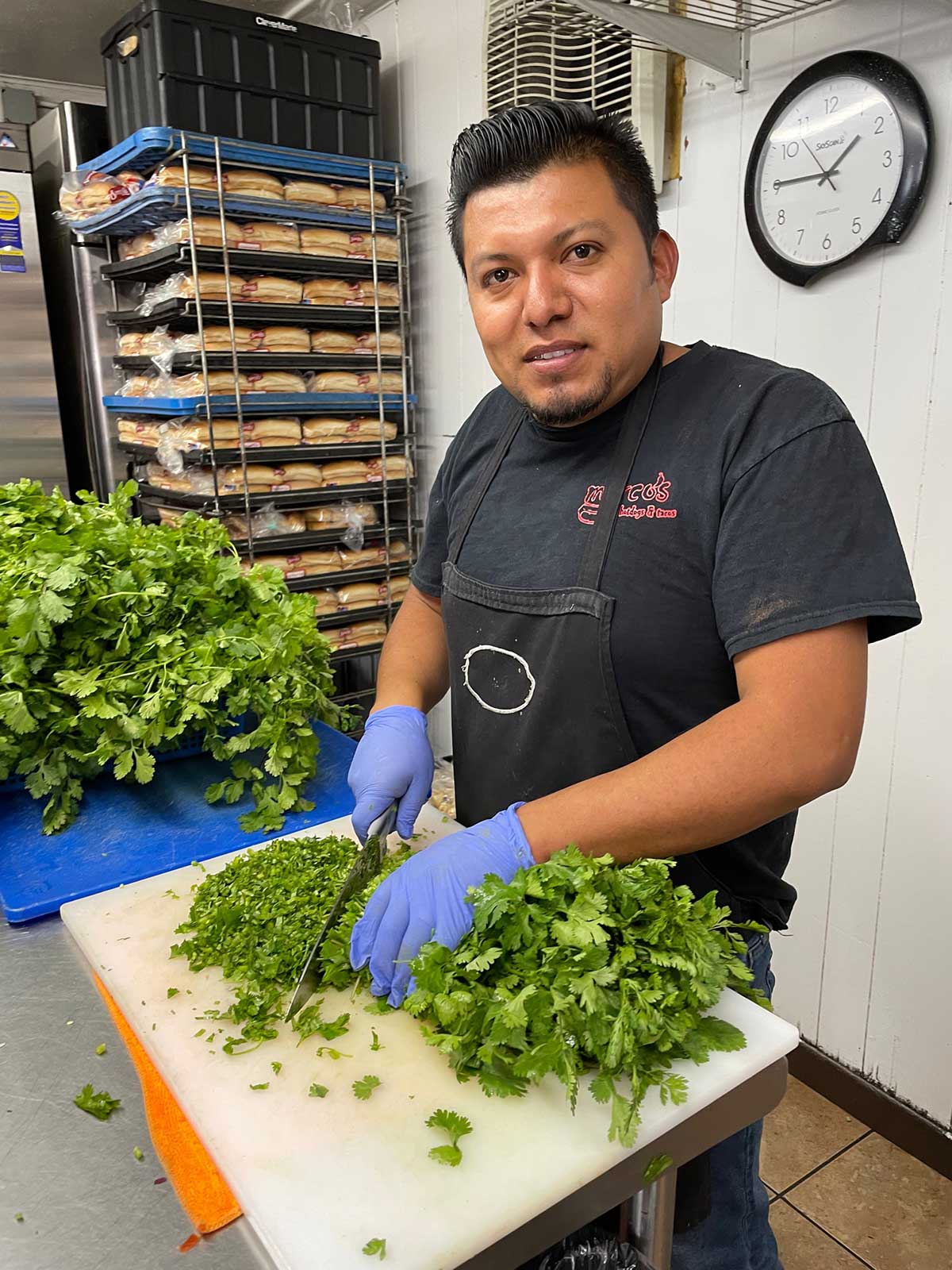 It was my own extended family who was responsible for my first taste of Marco’s Hot Dogs & Tacos. My brother-in-law was visiting from Park City, Utah with a love of Mexican street cooking. He’s the kind of person who always stops into the smallest restaurant he can find and once he found Marco’s he took anyone he could find, including us. He brought his 80-year old parents, my husband and me, and our then 6-year-old son. Each trip was really another chance for him to enjoy a bacon-wrapped, onion-smothered Sonoran dog.

It’s fitting that family introduced us to Marco’s because, for Marco’s chef Arturo Silva, their family is at the core of what they do.

As Silva chopped cilantro and talked to me, his brother-in-law Jose Luiz was next to him. It was clear that Marco’s wouldn’t be there if it wasn’t for family, and for the family matriarch, their mother-in-law Maritzi.

Silva first cooked in kitchens in Mexico at 13 years old, and then when he was 18, Maritzi taught him how to cook everything that the restaurant makes. She learned it by selling bacon-wrapped hot dogs in Juarez, Mexico years ago. Those are what they brought to Longmont. She opened the restaurant, starting operations about 25 years ago, and keeping on top of things daily.

Silva first stepped into the kitchen with her when he was 18. He doesn’t exactly remember the smells and experience with her; he remembers what it felt like to be in her presence.

“Anything that she cooked, she cooked with love,” he said. “She loved how much we enjoyed her amazing food. She could see in everyone’s face how much they loved it. Now, this is her dream, to have a restaurant where people could enjoy her food,” said Luis as Silva nodded.

The first months and years of the restaurant were different from what customers see today. The restaurant was smaller, and the back part of it (where we spoke) was the most historic part of the building. Initially, they served burritos rather than the dogs they’re now known for.

“When my mother-in-law was here she said, ‘everything we made for today is to buy what we will have for the restaurant for tomorrow.’ That’s how we went on for years. It was day by day,” said Luis.

Those early days in the kitchen with his grandmother led to early mornings and long days. Silva doesn’t seem to mind. Marco’s beloved matriarch passed away in 2018.

Both brothers-in-law wish she could see their current success, which said only really fell into place about four or five years ago. “Now it’s the kids that are here, us. This institution was a 20-year process of figuring out how we were going to do it, how it was going to work,” said Luis.

Opening up catering was part of the success and ongoing hard work. When asked if there was a day when they knew everything was going to be ok, Luis said, “Every day is ok. Every day is a good day. We always thought that.”

In addition to cooking to honor his mother-in-law, for Silva, it’s a way to earn a living for his own family, his three kids, and his wife. She was around the restaurant that day, helping and listening.

Luis said that family, both past and future, is the inspiration for the next steps in the restaurant. “We want to make sure we keep her dreams alive by keeping the restaurant alive. Maybe with another franchise. Or catering.”

Silva finished by reiterating some words from his mother in law, “She always said I don’t have anything besides this restaurant to give the family.”

When you’re Marco’s, a single-counter restaurant full of family is more than enough of a legacy.